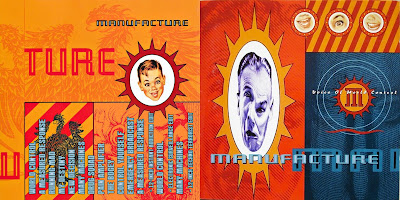 Again, attracted by the Steven Gilmore cover, and the fact that their previous album with Sarah Mclachlan singing a song with them, I picked up this with a hope of some great Industrial tunes.  Well, they ended up what we would probably call Darkwave or Future Pop instead, but there are some really good songs on this one.

I picked it up in the winter of my Freshman year in college, and listened to it heavily while walking to and from class on campus.  While not as good as Nine Inch Nails' Pretty Hate Machine, Skinny Puppy's Rabies or Ministry's The Mind Is A Terrible Thing to Taste, I would compare it more with Single Gun Theory, Frontline Assembly or Front 242 (in quality, not so much style.)

The best tracks for me have to be New Decision and Control Yourself, simply because I really like the vocals and melodies from those tracks.  The rest of the songs are pretty good, though.  This is a prime example of that proto-Industrial sound right before Nine Inch Nails and Ministry tore the scene open in 1992.

I still used the original cover, but used the single sleeve of A Measured Response for the back.  No b-sides, but I tossed a few remixes on for good measure.  There's still about 5 mixes out there, if you like this, I suggest you hunt down the rest.  I hate it when there's not enough material for two discs, but too much for one disc.  That was the case, here.