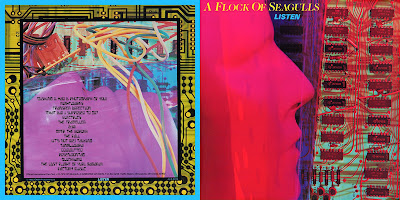 A Classic New Wave album, AFoS was always one of my favorites from the time when I was young.  I'd watch Friday Night Videos at my friends house when I'd spend the night and we'd stay up until 3 or 4 AM.  Sure enough, we'd see at least one Seagulls video.

Their music was great, and the hairdos were wild, but that guy with those fucked up glasses...  Geez, dude, pick some better frames.  Where I come from, glasses like that are called BC Glasses, or Birth Control Glasses.  Because, if you were ever wearing glasses like that, you weren't getting laid by anyone.

There's really not a whole lot to say about this album.  It was the Seagulls second album, and it had three singles, including Wishing.  I liked this album better than their first one, because it sounded more confident and self-assured.  Their first album was really wild and raw, like they were throwing themselves out there to make a statement or impact or something.  This one wasn't like that at all.  It was simply about making good music.

I have all the album tracks and b-sides, but no remixes.  That will probably be a separate disc...

Email ThisBlogThis!Share to TwitterShare to FacebookShare to Pinterest
Labels: 1983, A Flock Of Seagulls, Listen