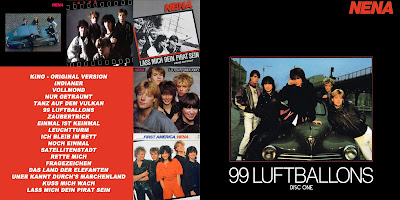 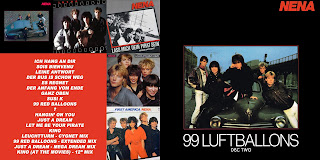 I say RED with capital letters, because it seems that all people want to talk about or listen to is the German version, Luftballons.  Yeah, yeah, fine and dandy.  But, as a 12-year-old American boy I didn't understand German, so I played the side that I could understand and was comfortable with.  It's not a racial or nationalist thing, I just wanted to know what she was singing about!

Years later, I still see this song as a defining song for the 80s.  I ended up purchasing the US release of 'Nena' in the early 90s at a used record store, and was impressed by it.  I didn't much care for the half German/half English format, but all of the tracks were good, and I enjoyed listening to it.

So, I've compiled all of the tracks from the first two albums, plus the b-sides, plus the remixes, plus the English versions, and put them all on one 2-disc set.  Now, you have everything that Nena released in those first years of popularity and rise to stardom.  I feel that this is the only way to present them, as the later albums are more conducive to my regular format.  The first two albums and the US release were all made and released within the same 2-year time span, so their sound remains consistent.

It's a great set, so you should enjoy it.  Mind you, 80% of it is in German, so you'll have to love her voice and the melodies more than the words, if you don't know what she's saying.