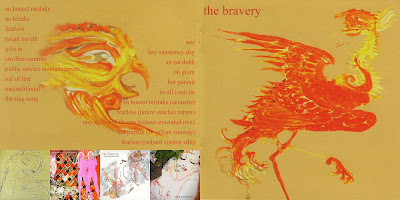 So, in the midst of this Britrock wave from 2004-2006, I felt that we got two American bands who sounded more "British" than the other British bands out there - The Killers and The Bravery.  Just like Oasis and Blur a decade before, the music press pitted these two against each other to see who was the best.  Unfortunately, neither band was able to garner much excitement past their first album.  The diehard of us stuck around, and they put out some good material, but not like these debuts.  I think that the Killers ended up winning in the end, but I always loved The Bravery more.

It was an Indie Rock sound, with some 80s Wave and some Post Punk vocals.  The tunes were catchy and the concept was truly creative.  I thought that Endicott's vocals sounded a little like Robert Smith's vocals on a couple of tracks.  And Conway's keyboards actually gave the music some substance that refined the rawness of the rest of the performance.

They released two more albums, that progressively proved that they put all of their good work on the first disc and then didn't know what to do.  Some of the songs on The Sun and the Moon were good, but overall they lacked cohesiveness and creativity.

I used the same cover as the album, grabbed all the b-sides, and some of the mixes.  It's a good set, and my favorite album of 2005.

Email ThisBlogThis!Share to TwitterShare to FacebookShare to Pinterest
Labels: 2005, The Bravery