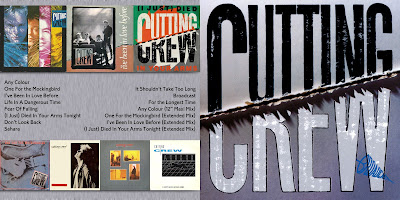 When this album came out, it was my little sister who purchased it.  I looked on with disdain and disgust and razzed her for listening to such a bunch of wimpy girly-men.  I watched the guys on MTV and listened to them when my sister played their tape.  But, I didn't pay them much mind.

In college I was at the record store shoveling through the used CDs, and came across this one.  It was only 1.99, and I had already heard it, so I didn't think it could be so bad if I got it and gave it a listen to again, just for nostalgia, if anything.  Listening to it once again, I realized that I truly did like this album, quite a lot.  The song writing is pure, the melodies are catchy, the vocals are strong, and its not as obnoxious as I used to think.  It's just solid 80s rock, good listening and well worth owning.

The first six songs back to back are really impressive.  It's almost one solid piece.  If I didn't know better, I would almost say there's a hint of AOR in there.  "Side Two" is sort of sketchy, but it still pulls out sounding fulfilled.  It's too bad their follow up albums didn't stack up to this first one, because it was great and I have always wanted more.

I have the b-side on there at the end, as well as four mixes.  The cover is the US release, and the better of the two covers issued.  So many single sleeves!  I only kept the best and we still have 7 of them.