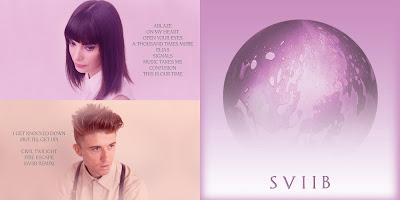 When I first heard SVIIB, I knew nothing about the band.  As I listened to the album more, and completely fell in love with it, I learned more about the band and found them to be a tragedy in music.  Benjamin Curtis started his life in little Lawton Oklahoma, but ended up in New York City writing fantastic music and performing with School Of Seven Bells.  In February of 2013, he was diagnosed with Lymphoma and was dead before the year ended.  It's always a travesty to see young people in the prime of their lives die from something beyond their control.  We see people throw their lives away worthlessly all the time, but then someone who wants to live has that stolen from him and there's nothing anyone can do.

This album was written and performed by the two of them right up until his death, but then it was produced later but only released in February of this year.  As Rolling Stone described, its a cross between Shoegaze, Indie Rock, Dream Pop and Electronic, and I have to agree.  You can't really pigeon-hole this one, and I love it.  It's got some complex sounds and beautiful vocals and the melodies are striking and addictive.  I'll find myself humming their songs all the time.

There aren't any b-sides or remixes from this album, but I did pop a remix that they did for Civil Twilight on there, and it fits right in.  If you've listened to their album that I posted last month and liked it, you will be even more surprised to hear how good this one is.  I venture to say that this is my favorite album of 2016, and we're only halfway through the year.