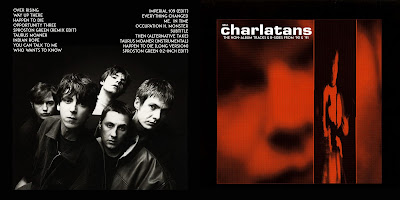 This is the first of two "B-Side Compilation" sets that I'm posting tonight.  Actually, this one has b-sides and non-album tracks.

I've never understood why a band would put out a single without having it on an album to begin with.  I thought that the reason why singles were released, were to entice people into buying the album.  Then, the b-side was created so people would buy the album, but then also buy the single for the bonus track.  I can't even begin to pretend like I understand how the music industry works.

Anyways, after the Charlatans released their first big album here in the states, the then released three different singles afterward that fell in between that first and second album.  The singles and accompanying b-sides were great.  I loved them all.

They've released these some of these tracks on Melting Pot, and then some on Songs From the Other Side, but they never put all of them together on one disc.  I gathered all the tracks, then added the b-sides from Some Friendly, and now we have a nice little young Charlatans set that you can listen to without having to bounce between discs, whether digital or vinyl.

I hope it meets your expectations.

PS - I just got done compiling my Thompson Twins "Future Days" set, and boy is it a doozy.  I've got it scheduled to post on August 18th.  The covers aren't done yet, but I can hardly wait!!!

Email ThisBlogThis!Share to TwitterShare to FacebookShare to Pinterest
Labels: 1990, 1991, Charlatans