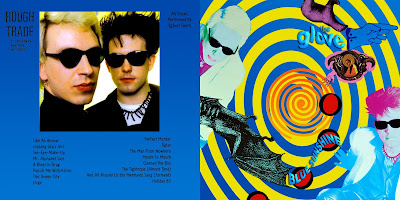 This was the post I originally intended for yesterday.  Sorry it's late, but what can I say?  It was beyond my control.

As I grew ever more and more fond of the Cure in the late 80s and early 90s, I started to accumulate as much material as I could lay my hands on.  I didn't find The Glove until 1992, and even then it was only on cassette.  I hate to say it, but I thought it sucked.  Sucked HARD.  The two Robert songs were great, but I couldn't stand their vocalist.  Still to this day she really turns me off.

So, when they released the deluxe set with the RS Demos on the bonus disc, I was ecstatic.  Overjoyed.  Thrilled.  I listened to it like it was a lost Cure album.  Well, essentially, that's what it was, to be honest.  Yeah, Severin was good in his own right, but IMO, nothing compares to Fat Bob.  If that makes some Banshee lovers out there mad, I'm unapologetic about it.

In a comparison side-by-side playing of the original album, and the RS vocal album, it's surprising how different they sound.  It's amazing what a difference can be made just by switching up the vocalists.

So, on my version, I kept all the Smith vocal tracks.  I cut out all the original release tracks and remixes.  I left the b-sides, and anything on which Robert sang.  I used a single sleeve as the cover, and here you have a beautiful "New Wave" looking album with all of the goodness, and none of the bad.

I wish I could've been Robert, he was so cool back then.  Now, though, eew!  Sorry, Bob, but you is fat and scary looking.  You look like Aughra from the Dark Crystal.  Time to retire.  It's best to have burnt out than to fade away...