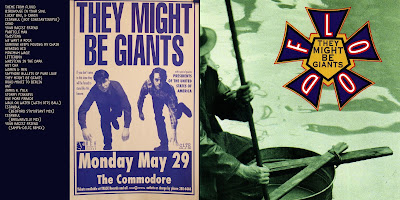 I got this one my senior year in high school, and I thought it was pretty good.  But, I didn't really fall in love with it until I drove to Mexico with my cousins a year later.  We drove for about 23 hours straight, and listened to this baby about 4 times.  We all sang it, we all laughed, we played it from the very first note to the last reverb.  We listened to other music on the way to and from, but for some reason, this was the only one I remember in detail.

I played it a couple years later when I was with my wife, who at the time was still my girlfriend.  Her mother seemed a little disturbed by We Want A Rock talking about a "prosthetic forehead on my real head."  She thought it was talking about something sexual.  My wife was like "No, Mom.  It's PROSTHETIC forehead, not PROPHYLACTIC."  Needless to say, I can only imagine what sort of images were going through her head when she thought otherwise.

They released a somewhat deluxe set along with Apollo 19, but I found a few extra tracks and the remixes.  Even with all of that and 27 tracks, it still comes in at just over an hour long.  Amazing.  It's because they packed so much goodness into every song, it didn't take long at all...