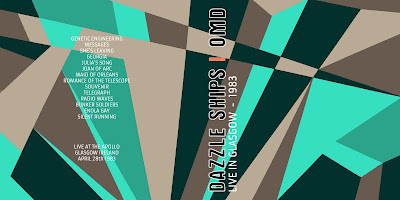 I think given the opportunity to see an early New Order, Depeche Mode, Cure, Smiths or OMD, I would have to say that more than likely, OMD would be my top choice.  I think that in the early 80s when all of these groups were still growing, OMD was showing the most potential, and writing some extraordinary songs.  Plus, I would rather see those other groups later in their careers, anyway.

A great soundboard recording, I think it might be an FM broadcast, but I could be wrong.  The show is an awesome set, with one exception.  The guys cannot single Souvenir properly, live.  It's really freekin' bad on this one.  I think that it's definitely a studio track only sort of thing.  It sounds like shit.

As for the cover, I did a little research on the title of the album, the artist, his inspiration and work produced by other artists also inspired.  I highly suggest you find out what a "dazzle ship" is, if you don't already know.  It's very interesting.  And this cover is also the work of one artist inspired by the "dazzle ships".  Check it out....

One fabulous night of shows left.  Don't miss it!
Posted by Unknown at 3:56 PM