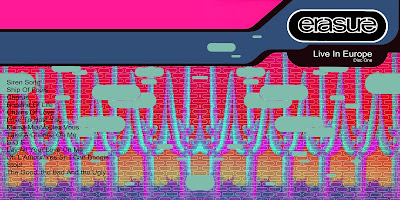 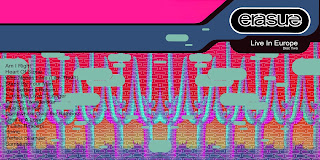 I've never actually seen an Erasure concert.  And not just live, for realz, in the flesh and blood.  I've seen maybe 20-30 seconds of a single song, on a documentary or something, and that's it.  Don't know why...  I also have only heard the concert from the video they did for the Wild! Tour, and this one.  That's it.  (Same goes for PSB)

I find it hard to get a full, live translation of their songs, as they are all pre-programmed studio recordings anyway.  I mean, yes, it would be cool to see Vince and Andy, but you hear this whirlwind of music, and it's just Vince up there 2-fingering a keyboard (that sounded naughty.)  It's not as if all of the sound is being constructed right there in front of you, as it is with guitars and drums and maybe some piano and strings.  That being said, if that's the case, I'd rather just listen to the album.  Better than listening to Andy sing along to an accompaniment track.

Regardless, those two Erasure shows I mentioned are great to listen to.  To me, these shows were Erasure at their best, when I loved them most.  I like every song they play, and Andy is really magnetic as a stage performer.  The sound on this is great, and the covers were fun to make.  I'd slide this double disc set inbetween Chorus and Abbaesque.

Email ThisBlogThis!Share to TwitterShare to FacebookShare to Pinterest
Labels: 1992, Erasure, Welcome To the Glitterdome