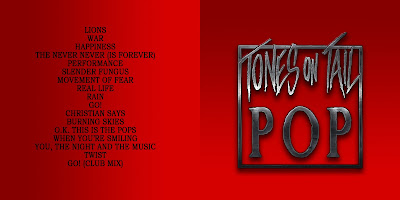 Me and the family are getting ready to go on a picnic, so I need to make it short tonight.  I first heard this band on a car commercial in the mid-aughts.  I had heard OF them, but never heard them until they had been "commercialized."  Sad.

But, straight from Wikipedia, if you don't already know...

Tones on Tail was a musical side project of Daniel Ash of the gothic rock group Bauhaus started in 1982, along with art school friend, flatmate and Bauhaus "roadie" Glenn Campling. The band's name is a reference to the way calibration tones were recorded on the "tail" of reel-to-reel tape. After the breakup of Bauhaus in 1983, they were joined by drummer Kevin Haskins, and became a full-time concern for all three members. Their music was described by one critic as "doom-and-dance-pop." The band disbanded in 1984, and Ash and Haskins went on to form Love and Rockets with former Bauhaus bassist David J.

I know that they released a collection in 1998 called "Everything" that would be the ultimate in expanded editions.  But, I have a problem with that.  When I want an expanded edition, I want it to gather all of the relevant material from that particular era/session/year.  Not EVERYTHING.  So, I've broken this one down and back to the original release with the remix and just a couple extras.  Dull, I know, but this is how I would prefer it.

Anyway, off to the park with a knapsack full of ham & swiss sandwiches and potato salad.  83 degrees out, and the sky is clear as a bell and deep blue.  We should have some fun!

Email ThisBlogThis!Share to TwitterShare to FacebookShare to Pinterest
Labels: 1984, POP, Tones On Tail