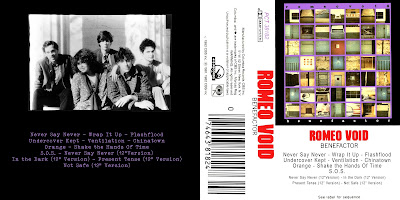 I've really got nothing to say about this album.  It's another 80s album that I feel deserves it's place in my collection.  I remember the neighbor kid who lived next to me when I was a boy had it.  It was his mom's tape, really, not his.  But, I remember her playing it once in the summertime in a boombox while she washed her car.  She was a divorcee, and fairly young.  Her son was a punk.  Not a real punk but a little fucking prick, to be more precise.  I also remember seeing the video of Never Say Never on MTV in the early 80s, and liking the melody.

But, that's about all the experience I have with it.

I've since listened to it, and like it, and think it's a fine example of New Wave.  I'm also impressed with their lead singer.  She's really got it together.  For the most part, the songs are good, not spectacular, but you definitely won't be wasting your time listening to it.  It's just....  good.

As for the cover, I remember the tape when I was a kid, so I specifically stuck with the cassette cover, which looks sorta cool for a CD.  And, all the mixes as always....