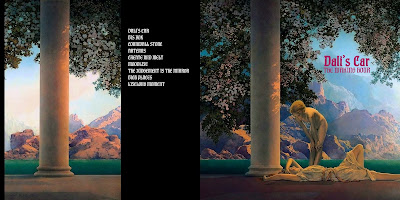 When it comes to my own discovery of music, I am so glad that I have the internet to help me.  I felt that I had been blind (and deaf) my entire life once I began exploring the diverse and expansive landscape of Rock & Roll from it's inception through today.  EVERY DAY I learn something new about OLD music that I didn't know before, and I feel like an archeologist or pirate or explorer on a quest for the hidden treasure that has yet to be uncovered.

So was the case of Dali's Car

Until I did some in-depth research on Discogs of Peter Murphy and all of his musical dealings, I had never heard of Dali's Car.  Never knew it existed at all.  It took me a while to find the nine songs that they recorded in 1984, barely a whole album.  I listened once or twice, then put it away.  A couple months later, I tried it out again.   This time while I was surfing the net late at night, all alone.  Better.  And better again.  It sounds like Experimental/Synth-pop/New Wave with a touch of late 70s Bowie and some of that late 70s Prog.  I'm not ready to say that I'm in love with it or anything, but it's enjoyable and very interesting.

I'm sure when it was released, people were surprised because it is a far cry from what Murphy had done previously.  As for Karn, it seemed like an extension of his work with Sylvian in Japan.  I can only imagine what the fans of Bauhaus were thinking, though...

The great thing about it, is when I finally discovered it in 2009, a full 25 years after it's release, it didn't really sound that dated.  Partially due to the fact that Murphy has that universal and classical vocal style that never goes out of style.

I never heard their 2012 follow-up, after Karn's death.  It would be interesting to hunt it down and see how it holds up with this set.  I'm sure it's a cherry.