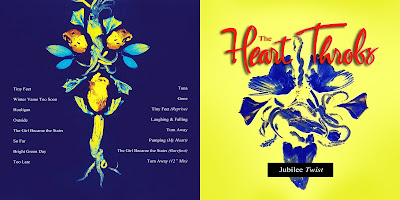 When I purchased their first album, I got it on cassette.  I thought it was pretty good, and worth getting on CD.  But that was about it...  When THIS album came out, I said "what the heck" and bought it on CD.  One listen, and that is when I truly became a solid Heart Throbs fan.

The first five tracks of the album are solid and perfect.  My personal favorite is Hooligan.  What a wonderful song.  It's got a super Madchester beat, with a surf guitar strum throughout.  But, Tiny Feet, Winter, Outside and Stairs are all favorites.  The second half of the album wanes a bit, but overall the album is a definite winner.

They released an EP called Total Abandon between their first album and this one, so technically I should have started the album off with that, if we were to remain strictly chronological.  But, they may have killed the momentum, so I tagged them on the end.

Finally, the cover is another beautiful Me Company cover, I love their work.

I got to tell you, it's difficult to type with Cheeto dust on your fingers.  I'm about to fuck up the keyboard with crud.  Maybe I should quit eating them long enough to finish this.  Hell no.