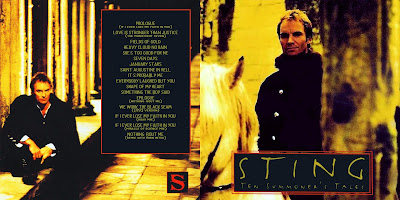 When I got this album, it was the first semester of my sophomore year in college at the University of Nebraska in Lincoln.  I vividly remember the street I was walking on, and the buildings I was walking between while walking on campus with my headphones on.  So, wanting to be complete and really set the stage for you, I went to Google Maps to specifically find the location so you could see what I saw those two and a half decades ago.  Zooming down to the exact, precise location in my memory on the map, I found myself literally on top of a giant building I had never seen before, in the middle of a garden campus with paths all over.  The entire face of the college has changed.  Some of the buildings are the same, but there is so much that has grown so much in and around what was once downtown Lincoln, it's almost like a cancerous growth.  And people wonder why kids can't afford college anymore.  I would digress, but this isn't the place...

I really liked this album.   Sort of.   I wanted to like it immediately.  And, I did, with IIELMFIY and LISTJ and Fields of Gold.  I said "HOORAY!"  But, slowly, the style and the demeanor of the music changed.  "Gasp!" I said.  "I think Sting's moving into that adult contemporary phase and maturing!  No more rock and roll!"  And, at the time with Grunge, Techno and Madchester in full swing, listening to this one seemed almost boring.

But, as I've listened to it for two and a half decades, I know well that it's an example of Sting's incredible versatility and fearlessness in exploring all musical options.  He has shown incredible strength in writing songs that can inspire and warm the heart, bringing out emotions and conveying them in ways only Sting can.

After listening to this album as I was working on the cover, I found myself singing Love Is Stronger Than Justice for almost two weeks.  Excellent song.  Love is a big fat river in flood.  Only Sting can do that!