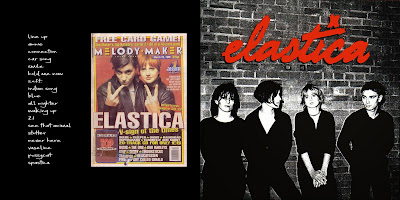 Here's a little rocker from the mid-90s during the peak of Brit-Rock influence across America.  Oasis and Blur were at their prime, becoming legendary before our eyes.  With them, there were a host of bands that were picked up by labels from all over as almost a clarion call to the horror that was American Grunge.  Blech!  Grunge unfortunately shifted to American Alternative, but the Brit Rock scene really put out some awesome stuff, and Elastica was in that mix.

Admittedly, the album sorta wanes toward the end, but for the most part you have some solid numbers with some catchy hooks.  And Car Song, of course, is really sexy, too.  It's unfortunate that their follow-up albums didn't share the same magic as their debut, but it was to be expected.  They had a lifetime to write their first album, and only a year or two to write their second.  That is where the talent and skill really shines through.  I'm satisfied to see them as a one-hit-wonder, not a problem. Just another CD to add to my huge collection of awesome crunchy guitars with that thick Brit accent.

I received my Hall & Oates tracks today from Neil, so we are on pace to get a big H&O deluxe edition that will one up the official deluxe, on April 24th.  I am so stoked!  I'm half-tempted to try and push out the cover some time this week and post early, but we'll see how my week goes, first.

On a side note, my wife still has not found a job, and her unemployment compensation has run out.  So, we've got about a month before things get really scary, and we're out of cash.  We will see what happens, I guess.  For any of you who believe in a higher power, drop a line for our family, and maybe a miracle will occur.  We definitely need it....

Email ThisBlogThis!Share to TwitterShare to FacebookShare to Pinterest
Labels: 1995, Elastica