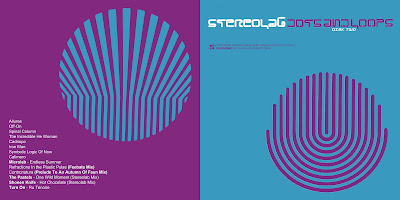 Dots & Loops came out when I was working for a restaurant chain as a troubleshooter traveling across the midwest working in various locations.  I think I've already discussed this before, so I won't go over it again.  The albums that came out that I listened to non-stop during that time were Medazzeland, OK Computer, Monaco's Music For Pleasure, Urban Hymns and this one, Dots & Loops by Stereolab.

This was the second album I ever purchased of theirs.  The first one was Mars Audiac Quintet because of the song Pong (saw the video for Pong on 120 Minutes and had to get the album.) I've never been a huge fan of their music, but I love the covers of their albums.  They are always extremely unique, creative and attractive.  When this one came out, I was driving a lot, and purchased it on cassette as I didn't have a CD player in my car at the time (don't get me started.)  I listened to this puppy A LOT.  As I said, I'm not a huge fan of their music, but this is my favorite album by them.

As you can see, this is just the b-sides, mixes and guest tracks that they either mixed or Lætitia Sadier was guest vocals from the same year as the album.  It makes for not just a complete set of their work from the album sessions, but also their direct influence with other artists and bands.  And, it all sounds good, all together.

I have still purchased every Stereolab release, as they've come out, and I am still not a huge fan.  It's because they are good to listen to for a couple tracks at a time before you get sick of them.  Large doses are impossible for me.  But, I get everything.  I like all the covers, and I've liked everything that they've released.  They are an acquired taste and a respect for their longevity and style.  It's unfortunate that they called it quits in 2009, though.  They claimed to have gone on hiatus, and promised to update their website, but nothing has been done to their site since that date.  People still post in their forum, but the band themselves are kaput.  Lætitia Sadier has released solo material, and the "current" members are either working on other projects or aren't doing anything at all....