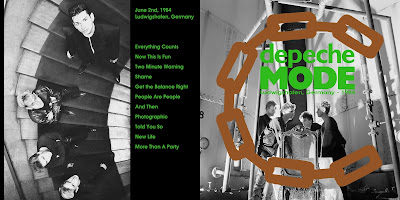 Not much to say on this one.  I only saw DM once during the Violator Tour in 1990 in Pensacola Florida.  Hearing them when they are 6 years younger, post MFtM (a turning point, I feel) and it's amazing that the deep dark voice of Dave is coming out of that scrawny little body.  It would have been fun to see them before they became the legends they are now.

This is a great soundboard recording, but I only have it at 128kbps.  That being said, it probably sounds more like a cassette tape than anything.  But, it's still a great show, and every song is an absolute classic.