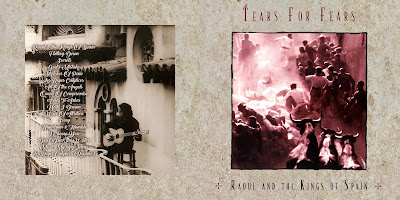 So, I'm home from work early today, as I really suffered these last couple of days.  So, I'm doing my posts for you early, as I want to work on some more album covers.

After Elemental, Roland Orzabal followed it with the wonderful, under-appreciated Raoul & the Kings Of Spain.  Grunge was in full swing, with a competing Britrock phase in America at this time.  Roland was busy playing what I would almost call Adult Contemporary music.  It was still Pop Rock, but the lyrics, music vocals and themes were way above the level of all the rest of the music that was playing at the time.

So, it got lost.  Three incredible singles a handful of b-sides and a few spectacular album tracks.  Very heartfelt, mournful, a little spooky, but very strong.  You can tell Roland really puts his heart and soul as well as his skill into all of his work.  And, it's more than apparent here.

Sketches of Pain, Los Reyes Catylicos, and Me and My Big Ideas are some of my definite favorites.  And every single b-side is more than worthy of being an album track if not singles in their own regards.  Queen of Compromise is incredible, as is War of Attrition.  And, I decided to add the Bowie cover of Ashes to Ashes, not just because it was recorded during those sessions, but because it's better than the blessed original.

I tried to redo the cigar box cover, but I couldn't find a decent enough scan of it on the internet, and I don't own it.  So, I settled for the original with a new backing texture, and the wonderful pic of Roland.  Good enough and suits the album well.

Email ThisBlogThis!Share to TwitterShare to FacebookShare to Pinterest
Labels: 1995, Raoul & the Kings Of Spain, Tears For Fears