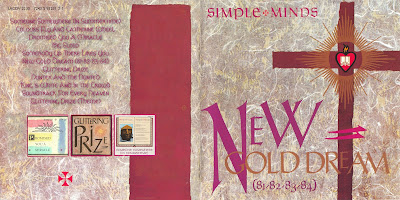 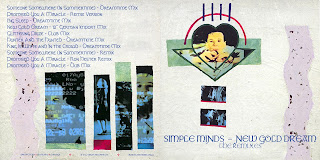 For YEARS I used to not like Simple Minds.  Well, I take that back.  I liked Once Upon A Time, and Don't You Forget About Me, but that was for obvious reasons.  Not because they were good (even though they WERE good), so much as they were way overly promoted.  So, I didn't like Simple Minds back in the 80s and 90s because I thought they were boring.  The songs seemed uninteresting, dull, just not very exciting to a boy in his teens and twenties.

Towards the middle of the last decade I moved my family from one midwestern state to another.  My oldest son was in school then, and my wife and I weren't comfortable pulling him out mid-year and switching schools.  So, the two of them stayed at home, and I lived in a hotel in another state for three months.  The trip between the two cities was about 400 miles, and I made that trip back and forth about 6 times in those three months.  They were long, boring trips that I hated but knew that they were necessary.

It was during these long trips, that I had books upon books of CDs that I stashed on the front seat of my car, and I would pop album after album, trying to fill the time with music, trying to make the trip that much shorter.  It was during one of those long trips, that I popped in, almost accidentally, New Gold Dream.  To say I was surprised, might be saying too much, but, I do remember being impressed.  I listened to it once, and filed it away.  The next trip, I was trying to figure out what to listen to, and I remembered that I had liked New Gold Dream, so I popped that one in again.  It became almost standard road music for me after that.  Hitting the streets?  Don't forget New Gold Dream, you never know when you'll want to listen to it.

True, Simple Minds doesn't write flashy trendy catchy songs.  But, they do write classic, well-crafted, almost beautiful rock and roll, with Post Punk overtones.  Yes, this album (and the ones around it) obviously sound "80s", but only because that's when they were made.  Lyrically, these songs held it together with beautiful strong, mature themes that highlight the majority of the SM catalog.  Comparatively, how would you rate the complexity of their lyrics with their peers during the same time?  SM were light years ahead.  Their melodies were subtle, yet rich and full.  The album itself was almost a tapestry of sound that weaved itelf into my subconscious, and it comes back to play occasionally.

I consider this album to be the first in their trilogy of excellence.  First, New Gold Dream, then Sparkle In the Rain, and last we have Once Upon A Time.  These three albums are SM at their prime.  I've already posted Once Upon A Time, and now you have New Gold Dream.  All that's left is Sparkle in the Rain.  But, we'll save that one for later....