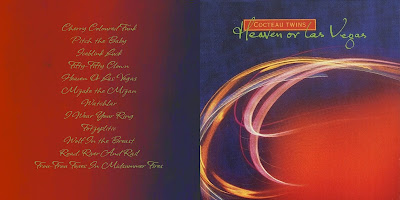 You're getting your daily update early, as I have to drive about 6 hours round trip to pick up my son tonight, and we'll be getting home late.

Cocteau Twins Heaven Or Las Vegas.  We all know and love it.  BY FAR this is the best of the CT albums ever.  This album brought them into the mainstream and gained a huge number of new fans, myself included.

I had heard some of their material before this album, but I could never get into them. They seemed a little too weird and  Elizabeth's vocals seemed a little TOO warbley and screechy.  She did a lot of scaling up and down, too, that I found to be rather annoying.

SO, my Senior year in High School, I see this pretty little cover sitting on the rack at my local music store.  It looked cool.  I was interested, but I passed it by.  I was driving down Holdrege Blvd several days later, listening to the local college radio station, and Iceblink Luck came on.  They didn't announce or introduce the song, it just rolled out after the previous song.  It instantly caught my ear, and I was in love, and I didn't even know who it was at the time.  After the song ended and they said it was the Twins, I was shocked.  THIS was something GOOD.

It took me all of an hour to get back to the music store and pick the disc up and put it in my car CD player.  It only took ONE TIME played through, and I knew it was a masterpiece.  One time.  It instantly moved into my top 20 albums of all time, and currently still resides in my top 50 albums of all time, 26 years later.

Unfortunately, there are only two b-sides from this album, and no remixes.  So, the b-sides are dropped between Side A and Side B, and you have all the tracks from Heaven Or Las Vegas.

If you haven't heard this album, you are in for a real treat.  I know you'll love it!