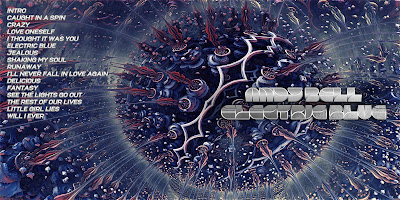 Andy Bell's first solo album, I always thought Electric Blue had a shitty cover.  Him with a blue face, how dumb.  And I mean that, just dumb.  The album deserved such a better wrapping than that.  I hate to lead this post with that, but it's the main point, here.

It's a good album.  Lot's of good, noodling synth-work.  Just as good as Vince's.  But, unfortunately, not as creative as the pair together.  Again, you get better magic in a group than you do on your own.  There are a few memorable tracks here, but I would personally find this album as a filler between Erasure albums.

That's why it needed the better cover.

This cover was the first one I made when I started experimenting with style layers on Photoshop.  That logo is just a plain old font that you can download from any free font site, but once you apply some layered texture styles, it turns into magic.  I must say, I impressed myself with this one.  I ran through a series of covers then where I used fractal art ripped from the web and applied layered logos instead of an actual cover.  I liked it, it worked for me.

And it works here, right?

Look, I wasted an entire post talking about the cover rather than the music.