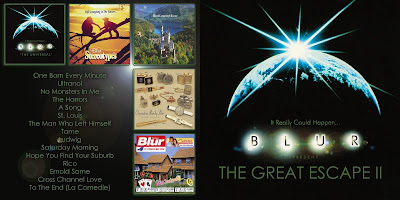 My second favorite album by the supergroup Blur, the Great Escape.  When the war between Blur and Oasis broke out, I was already knee-deep in Blur and hadn't listened to Oasis much, because I hated that song Live Forever.  This album was a monster for me.  I played it in the car on the way to Colorado and just had the speakers roaring.  Then, I got into Oasis.

Looking back on it objectively now, we may have been comparing apples to oranges, because Blur was more Pop and Oasis was more Rock.  Regardless, I now feel (and have felt since the late 90s) that Oasis is by far the superior band.  Not to say that Blur is bad by any means.  They're geniuses.  They just couldn't hold up against that Noel Gallagher.  He was just too much for them to handle.

I still love listening to this album.  the b-sides are great, too.  I know that they've released something like this already, but I needed to put my touch on it, and sort of make it an album of it's own.

I used the Universal picture sleeve as it was the easiest to alter.  But, I couldn't match the font.  Looks close enough.  Stereotypes was the best picture sleeve.  A blessed classic.