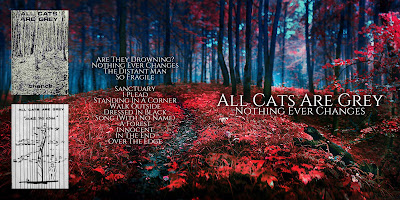 When you start sifting through demo tapes from unsigned bands, you never know what you're going to find.  That's what happened here.  Being a Cure fan, I naturally had to download these to tapes to see what they sounded like.

I downloaded them from Mutant Sounds back in 2008 with the two covers and a line or two on what it sounded like.  Yes, a heavily Cure-inspired band that is interesting to listen to.  Yes, they try to hard to be Robert.  And Yes, there isn't any other information available.  I scoured the internet and even Discogs has very minimal information.  In fact, nothing more than you'd find on the cassette liners.

Well, I'll tell you this.  The first four songs were recorded in 1981, and the rest of them in 1983.  They are from the UK, and Discogs lists the members names.  The song A Forest was supposedly recorded live?  I don't know.  But that is it.  If anyone else can find some more info, I'm sure a lot of a few people would be interested in knowing.

But, as always, the covers were for shit.  Both of them.  Look at them! Come on!  So, I picked a nice little stock pic from the web, threw a nice font logo on it, and there you have it.

Now you can say you have a COMPLETE COLLECTION of material from All Cats Are Grey.  You are going to be the talk of your neighborhood, now.

Email ThisBlogThis!Share to TwitterShare to FacebookShare to Pinterest
Labels: 1983, All Cats Are Grey