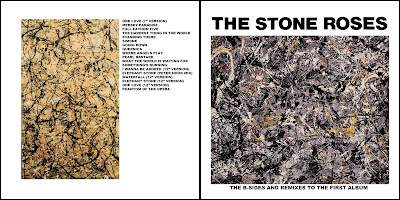 Obviously, Second Coming was not very good.  They had taken too much time off as a band, the magic wasn't there anymore, and Ian was ready to move off on his own, to become the Godfather of Britrock. (Noel Gallagher is the Prince)  So, collecting the b-sides from the first album sort of gives us the "coulda bin" second album of the Stone Roses.

There were several great tracks laid on the flip side.  Mercey Paradise, The Hardest Thing In the World, and Something's Burning were, IMHO, better than some of the album tracks from the first album, and also Peter Hook's Elephant Stone is better than the original.  Honestly, I'm not sure if I have all the b-sides and official remixes, and I am unsure if there are any unreleased tracks from this era or any quality fanmade mixes. So if anyone out there spots a hole, let me know.

As with the original covers, all the cover art for the Stone Roses were painted by John Squire, so I selected two of his works that weren't on any of the covers.  I hope this one will be able to slide right in behind their first album.

This is a good listen, so enjoy, and have a great Saturday night!