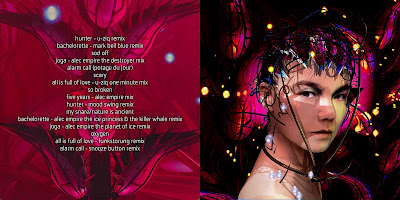 IMHO, this was Bjork's last good album.  Her newest one, Vulnicura, isn't bad.  But it doesn't compare to the masterpiece that was Homogenic.  A dark, personal album, it spent a vast majority of the time talking about her deepest, innermost thoughts and feelings.  Poetically, her lyrics were unbelievably fantastic (I'm a fountain of blood in the shape of a girl).  And the execution of the album was flawless.

I had already been collecting all of her work, but this album became a particular obsession to find every little piece related to it.  I had a poster of the particular I used for the cover above, there, hanging on my wall for nearly three years.  And, I still own it, rolled up in a tube downstairs, protected forever.

The disc I've collected today is one of the first b-side compilations I made when I got my first CD Burner.  I've burned it, listened to, worn out and reburned this disc three times in the last 20 years.  I've changed the cover several times since I first made it, but this is the first time that I've considered changing the green cover to red.  I think it turned out well.  Obviously, this is simply the b-sides and the remixes, as it was the original set that I compiled.  Plus, I didn't want to mess with the structure of the original album.  It would only pollute it's perfection.