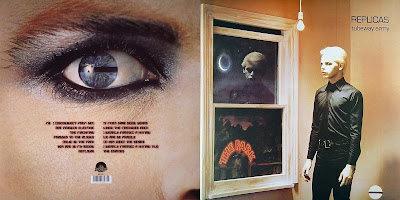 And now, it is my pleasure to introduce to you the absolute God of New Wave himself, the illustrious Gary Numan with his Tubeway Army!!!

I got this album sometime in the mid-80s, and fell in love with it.  As time passed by, and music changed and my tastes changed, and this album became older and more distant, I finally realized what Gary was up to.  His music begins to take on an alien sound that haunts and reminds of the past, yet sounds as if it could be music of the distant future as well.  It's as if it exists in a parallel distopian civilization of darkness, cold and barren.

I can almost see this album as a sequel to Ziggy Stardust or Aladdin Sane.  He took what Bowie started and pushed it right over the edge.

To this day I think that Gary Numan is completely under-rated and feel that despite his cult following, he should've been way bigger than he ever was.  His pioneering sound spawned countless imitators, but none could hold a candle to his vision.

I had to laugh when Basement Jaxx released their Where's Your Head At single, and there in the middle is a sample from this album.  A perfect nod to the King of electronic New Wave.

I always liked this album art, front and back.  So, I kept it the same.

This album is QUINTESSENTIAL and a definite MUST HAVE for any New Wave enthusiast. I pity the fool who doesn't have this album in their collection.  I really couldn't take you seriously.