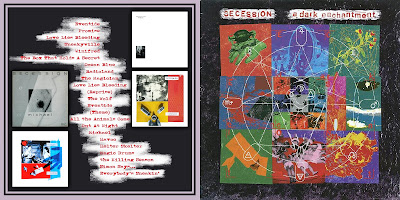 I mean, I'm just going to be openly honest here.  I've downloaded a lot of music, and I've downloaded a lot of music I've never listened to, nor have I even heard of.  I had a request for Secession, and on a whim, saw that I had quite a lot of their material. Once I researched it, I had everything from this album - singles, b-sides and all.  But, guess what.  I'd never heard them before.  I've barely heard OF them.  But, the descriptions that the bloggers gave in their posts said "Hey!  Listen to this stuff!  It's Great!!!"  So, I downloaded it, I have it, I compiled it, and now it's yours.

Don't think this is a common place thing.  I just happened to have the stuff, and even then I've been debating on posting it. I'm not always big on special requests.  I take suggestions and whatnot, but I'm not planning on becoming a wishlist site so you can grab and go.  You have to stay and read my meanderings as well.

PS - I am going to be out of town for the holiday weekend, and won't be posting anything on Saturday, Sunday or Monday.  So, that being said, tomorrow night is going to be a VERY SPECIAL POST with some stuff you're going to want to have.  So, come back and don't miss it!
Posted by Unknown at 5:01 PM

Email ThisBlogThis!Share to TwitterShare to FacebookShare to Pinterest
Labels: 1988, A Dark Enchantment, Secession