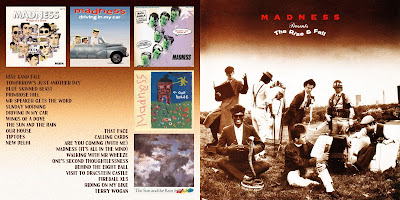 If 7 is their best album, then The Rise and Fall is their second best.  Look at the track listing!  Five singles and every b-side!  It rides smooth and fun the entire way.  But, when I added the b-sides at the end, it seems a little herky-jerky.  But, hey...You got the b-sides, right?

At their prime, Madness pops out another stellar album with their well known song Our House.  I wish I had a little anecdotal story to tell about this album...  but I don't.  Just love listening to it.

Honestly, though, I am a little preoccupied tonight.  The US Political system is in shambles, the general population is divided into two polarized camps with no middle ground.  We have a side-show act as candidates for President.  We have people losing their minds over a gorilla getting shot, but nothing gets said about the 60 shootings that took place in Chicago over Memorial Day weekend.  And, to top it all off, a drunk guy in Cincinnati decides he want's to go into a Kroger's grocery store and strip down naked, and then take a shit on the self-checkout scanner.

You can't make this stuff up.

SO, plug in a little Madness (sic) and escape to a world of joviality.

Email ThisBlogThis!Share to TwitterShare to FacebookShare to Pinterest
Labels: 1982, Madness, The Rise And Fall