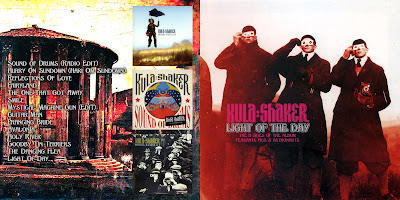 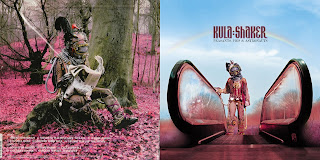 My favorite album of 1998-99 was Peasants, Pigs & Astronauts by Kula Shaker.  I had thought their K album was pretty good when I got it, but this one completely blew it out of the water.  It's a complete blast.  From the eerie, spacey opening of Great Hosanna, to the very last mystical chant of Stotra, the album pulls you into this otherworldly experience of psychedelia that I can only describe as cosmic transcendence.  Don't I sound full of shit?

Needless to say, this was an album that still rocks my house at least 3-4 times a year.  It's musicmusicmusicmusic...  Okay, where's that Kula Shaker album? It's also freekin' awesome to play air guitar on this album, too.  Pull out that Townshend windmill move.  Or maybe that Billie Joe Armstrong stance.

It's hard to think of areas in which the album suffers.  It's speeds up and slows down just where it needs to, and never gets boring.  It sucks you in when it slows, and explodes all over you on the power anthems.  Mystical Machine Gun, Great Hosanna and Golden Avatar to name a few.  My favorite song is Timeworm, a slow subtle track that's slinks in and melts all over your brain, right before the albums closing tracks.

BUT, the reason for this post wasn't the main album, but the B-Sides, which are just as good, and I have compiled into a nice supplemental disc to accompany this fine album.  They're pretty good, not as good as the album, but a necessity to a complete Kula experience.

Just remember, you don't have to be a hippy to like this kind of music.  Ain't that right, Ryan Parr?