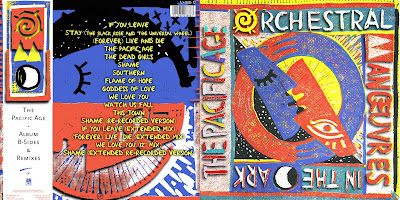 Definitely a band that is in my top 5 personal favorites, OMD's Pacific Age was a staple of my Freshman year in High School.  I know that If You Leave isn't technically supposed to be on this album, but I remember that I couldn't listen to this album without it.  I had the 45-rpm of it and I taped it onto the end of the album cassette because there was enough blank room for it.

It really sort of pissed me off, though, when I got the greatest hits album and only Live and Die was on there.  Yes, I know that the other singles off this album weren't super, but they were better than some of the other singles they left on there.  Regardless, the singles and mixes from this album are a lot of fun and rather Pop sounding, less New Wave.  It was a typical album for that time, fitting in well with Wang Chung, George Michael, PSB's first album and DM's Black Celebration.

I had fun enhancing this cover, giving depth to the lettering.  Although I am somewhat disappointed that I didn't put all of the singles picture sleeves on it, I think it turned out well.

Email ThisBlogThis!Share to TwitterShare to FacebookShare to Pinterest
Labels: 1986, OMD, The Pacific Age