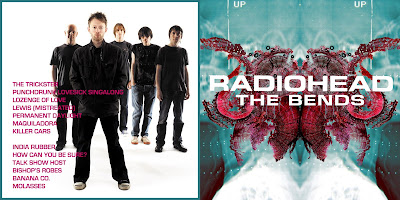 So, these are the b-sides to The Bends.  You probably already have this disc, as they have re-released the album with a bonus disc of all the b-sides.  Sorta takes the fun out of collecting all the singles when they'll turn around and release a disc like this.  That being said, this is nothing new.

The reason why I wanted to post it, though, was to say that although OK Computer was a great album, The Bends is a better album and very underappreciated.  The B's are good, too.  Thom's vocals hadn't really gotten too bizarre, yet.  And the music was a little more cohesive.  I thought it was an awesome sophomore release, if anything.

I found the cover I've selected here on the internet as a wallpaper.  This cover is another reason why I wanted to do this post.  The wallpaper (thanks to whoever made it) is a far superior graphic for the album, IMHO.  If I could have found a way to keep the faces on there, though.

Anyway, it's a throwaway post.  Nothing new, just a different cover and a lot of bullshit on my part.  I've got Depeche Mode tomorrow, if that'll make you happy.

Email ThisBlogThis!Share to TwitterShare to FacebookShare to Pinterest
Labels: 1995, Radiohead