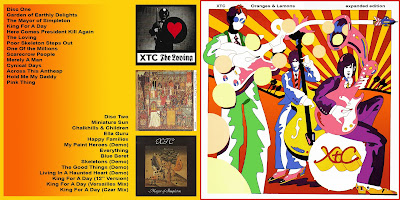 My second (or is it third?) favorite XTC album behind the Apple Venus/Wasp Star set.  Got this one my senior year in High School when I was big into REM, Guadalcanal Diary, Pixies, Camper Van, Husker Du, etc.  This one has always been a cherished album of sugary perfection.  The pop hooks are almost sickening sweet and I love every one of them.

The singles from this one are spectacular, but I must say the entire album has merits beyond the singles.  And, the mixes and extra tracks just add to this little treasure.  It's fun to try and figure out which tracks go on which album as Partridge releases them willy nilly without a clue as to when they were recorded, so you have to do some intense studying.  What I do hate, though, is that they included some album tracks from some previous albums on the singles from this album.  So, I spend all this time thinking I've got a non-album track until I do some studying and find out it's not even the right album.

But, that's beside the point.  The point is, I think this is one of their best, and it was an excellent way for them to close out the 80s.  There are some songwriters out there who don't have it, and some that do.  Andy Partridge, to me, simply HAS it.  It comes so naturally to him to write these little gems.  It's like magic.

Now, I'm off to try and figure out why the computer won't access the hard drive....  This could be interesting.