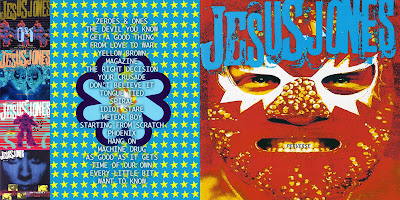 After Doubt, I was excited for the release of Perverse.  I expected a lot, after the success of the previous albums, and also from the countless interviews I read with Mike talking about songs that would one day be played on elevator music because it was so good it would be considered timeless.  Huge expectations from a lot of us.

But, by the time of this release, Madchester was dying hard and fast, and Grunge and Techno were killing it.  The album sounded lost, like it didn't know where or what it wanted to be.  There are some really great songs on this album, but as a whole, it lacks in execution.  Some songs retained their traditional JJ sound, others tried to move forward, and others tried different styles that just didn't fit with JJ nor the album itself.

NOTE - I must remind you, if you haven't already guessed, that when I write these commentaries, it nearly all comes from my head, in the way I feel about the albums, what little memory I retain about the albums, and hardly any research.  It's part of the magic of this blog.  I should rename it "Bliss In Ignorance".  If you want facts, go to Wikipedia or Discogs.  You're not going to find hardly any here.  Wink wink.

Back on to JJ's Perverse, I will say that I like the album.  I will always have it, and consider JJ as one of my favorite bands.  Probably in my top 100 bands.  But, I will only listen to some of the songs on it, and probably won't ever listen to the whole thing through in one sitting, ever again.

Now, Already is another story.  That is their undiscovered masterpiece.  But, that is for another day....