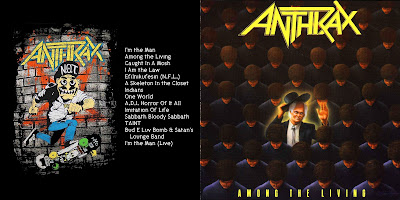 Technically, you could say this is actually the first "Heavy Metal" album that I've posted.  No, I guess I posted Megadeth two days ago.  That makes this the second.  But, more on that later.

Funny, I discovered Anthrax from their I'm the Man EP.  I knew they were Thrash, so to see this "Rap" song from them made me interested enough to want more.  Again, Sophomore year in High School (I was exposed to A LOT of stuff my Sophomore year.  OR was 1986-88 that fucking great for music?  Never know for sure.)  Yes, I'm the man is a hilarious novelty, but the rest of the EP was stellar.  It led me to purchase Among the Living.

Among the Living, along with State of Euphoria, are my two favorite Anthrax albums.  The rest are great, but these two have a genuine magic that the others don't.  I think that the reason why I like these so much, is they didn't have the same trappings that the other Metal/Thrash bands that were out at that time.  They weren't the sleazy, greasy boozer types.  They seemed more fun, more driven and more creative.  Plus, they liked skaters, and I liked that.  Even though I was a poser anyway.

I have that NOT Man graphic on a t-shirt.  It's my only Anthrax shirt.  I love wearing it.  And, when I wear it out, I'll probably buy another.

They're Anthrax and they take no shit
And they don't care for writing it....

Email ThisBlogThis!Share to TwitterShare to FacebookShare to Pinterest
Labels: 1987, Among the Living, Anthrax