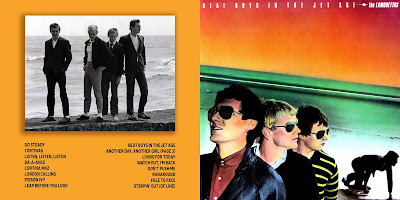 I discovered the Lambrettas about the same time I discovered the Merton Parkas and Nine Below Zero.  I had a tough time categorizing these bands as, at the time, I had no idea what Power Pop was.  Hadn't really heard of it before.  I mean, it wasn't New Wave, it wasn't Classic Rock, it sounded a little like Garage Rock (whatever the hell that's supposed to be).  So, when I heard someone classify them as Power Pop, it hit me as to how perfectly accurate it is.

Great bands like the Lambrettas really seemed like bands out of time.  I think the whole Power Pop movement got smothered with New Wave, Disco, and the Rock that we now call Classic Rock.  I know that they are something of a revival from the 60s, but I think given the time and exposure, we could have heard a hell of a lot more and better from them and a lot of the Power Pop acts out there.

I don't want to say the Lambrettas were the best of the best, but they were pretty damn good.  This is an active, sing-a-long, toe-tapping set of tracks that are in a style similar to New Wave, but minus the keyboards.  All of the tracks from this album, including the b-sides, have already been compiled previously, with the exception of one track.  SO, essentially, I made this set for one more track.

Have fun listening to this one.  It may surprise you, just as it did me.

Email ThisBlogThis!Share to TwitterShare to FacebookShare to Pinterest
Labels: 1980, Beat Boys In the Jet Age, Lambrettas