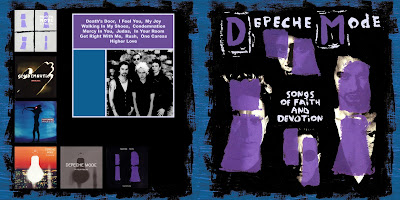 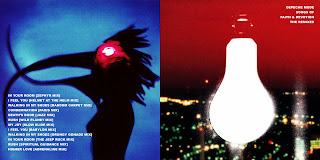 We've got a big post today!  I've been working on a compilation of fan mixes this week, and I came across a huge cache of excellent Depeche Mode mixes from mixers I hadn't heard of before.  I was so inspired by DM, I had to up this post by a couple weeks because of it.

DM's follow-up to Violator, I felt this album had been heavily inspired by the increased popularity of Grunge and Industrial bands in the US.  It's really DM's first hard album, a lot harder than any other album they ever released.  Being really into NIN at the time this album came out, I was really taken by it.  Honestly, it is beautifully written, and really captures the essence of what DM was at the time.

Unfortunately, it was Alan Wilder's last album, and on future releases it became readily apparent that he was the master designer behind the art of the other three.  He brought them together to make the work beautiful, and it really shows here.

Best songs on the album would include Walking In My Shoes, Judas, In Your Room, Rush and Higher Love.  They all contained strong intensity in their lyric and performance, work to be admired.

The remixes were, in some cases, better than the album tracks.  William Orbit's mix of WIMS is spectacular, and the Zephyr Mix of In Your Room really leads the pack, blowing the original out of the water.

I never cared for I Feel You.  It's a grinding dirge of sorts.  Really grates on my nerves....

Such a good album produced one of the best tours of the year.  Excellent performances that really show that they aren't just studio artists, they can handle and execute perfection on the stage.  I had gone to the Violator Tour in 1990, but I missed this one.  Really kicking myself on it now, it would've been great.  Many jealous kudos to those who were able to see this one!!!

I played this album and the mixes for years.  Long after others had faded away into the depths of my collection.  Not even Ultra stopped this one.  It's not my favorite DM album, but it was their last great one.  The rest have been marginal at best... 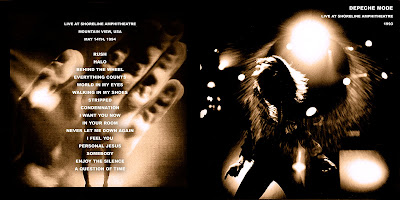