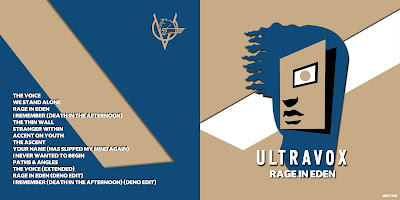 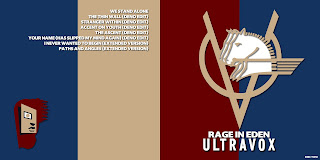 I had heard of Ultravox before, but just out off in the periphery of my musical knowledge.  I knew nothing about them and I had never heard of them at all.  Once I got involved in music online via blogs, forums, torrents, etc, I learned more about them and collected as many albums and tracks as I could find.  They weren't bad, pretty good.  No D2, but they really captured that New Romantic sound that was obviously popular at the time.

Out of all of their albums, I liked Rage In Eden the best, followed quickly by Vienna.  I'll be posting that one later...  It's a shame that I hadn't heard more of them before when I was younger, as learning and listening to them while they existed would've been great.  Who knows, I may have liked them more than D2....  Nah, I don't think so.

Anyway, I recently found these "Deno Edits" of their tracks from this album, almost all of them.  More fan edits that have taken the originals and simply s t r e c h e d them out.  They're fun to listen to, and gives US a reason to have a deluxe version of their best album.

As you can see, Blogger still hasn't fixed what I've come to learn is a glitch in their system, or something like that.  So, from here on out, I will make sure to zip the covers up in the files along with the albums.  I know that I've been hit or miss on that, but now I will do it for sure...

Email ThisBlogThis!Share to TwitterShare to FacebookShare to Pinterest
Labels: 1981, Rage In Eden, Ultravox