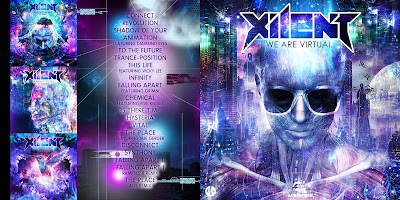 I honestly haven't been the greatest fan of Trance or Dubstep.  I sample artists when I can, but I rarely have found any worthy of following.  The ones I hear most about, are usually too trendy and their music sounds like shit, anyway.

I happened upon Xilent here last year, and have enjoyed him the most of all the artists so far (followed closely by Datsik.)  I wouldn't put him on par with BT or Oakenfold, but he's definitely on par with ATB or Van Buuren.

The cool thing about Xilent's work is that he uses the dub and the sounds to actually create a melodic creation.  Too often these artists are just interested in creating a beat and going crazy all over it with the dub.  That is a waste of time.  Xilent actually turns it into something worthy of artistic merit.

I collected the tracks from the Virtual album and the accompanying singles and some additional remixes that he's done for others.  This is a good CD to listen to while your driving about town with your mates (listen to me, trying to talk like I'm British or something.)  It's great loud, but it's also good as simple background music while you're chatting.  I like it, I hum it occasionally at work, and it's one that I've included in my permanent collection.

The Falling Apart mixes are the best...

Email ThisBlogThis!Share to TwitterShare to FacebookShare to Pinterest
Labels: 2015, We Are Virtual, Xilent