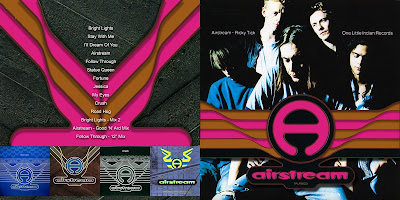 I'll have to admit the only Airstream disc I actually purchased was the Airstream by Airstream disc, as it was recognizably a Me Company cover.  After seeing the Shamen covers and hearing their awesome music, I was certain that Airstream would be spectacular.  But....  well, you all already know.

There isn't anything wrong with Airstream, just not what I expected and not as solid as I thought they could be.  They seem to fall a little to the trendy wannabe side of Madchester.  Am I wrong?  They essentially sounded like every other Madchester band out there.  That isn't always a bad thing. As long as you're in to Madchester.

If you haven't heard these guys before, you're not going to be surprised by anything, nor overwhelmed with admiration with what they've released.  It's an average band who released some average songs.  A few of them will tick up here and there, but for the most part, you'll feel as if you've already heard this one before.

So, if that's how I feel, why did I take the time to post it?

First, I love their logo.  Second, I really do like their song called Airstream.  It's fun and captures the heart of Madchester.  Third, it's Madchester, good or bad, and I really don't mind listening to it.  Lastly, I'm an obsessive/compulsive digital hoarder.  If I've got one, I have to have them all.  If I have some, I have to have every.  That's the nub of it.

I've got all of their b-sides and a couple of their better mixes.  As for the cover, that is the actual cover, I just added some layers to make the shadows and such.  Not a bad cover....