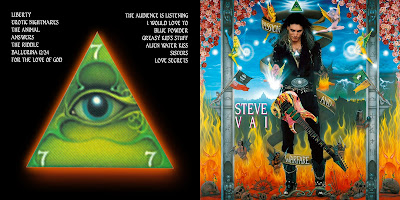 I was introduced to Steve Vai by a guy on my soccer team my Sophomore year in HS (again with the Soph year!)  He told me about this brilliant guitarist, and made me listen to The Attitude Song from Vai's 1984 album Flex-Able.  What a FUN song!

Not long after that, and David Lee Roth released Skyscraper, and I found out Vai was playing guitar on that album.  Fantastic album!  Great stuff!

So when Vai came out with Passion & Warfare my Senior in High School, I was ready and waiting.  It was a perfect and beautiful album. From the powerful Liberty and Animal, to the beautiful Ballerina and Alien Water Kiss, to the fun The Audience Is Listening, I think that this album has a lot to offer everyone.  There are some great ballads and some real rippers.  But not a bad track on the whole album.  Great highway music in the summertime with the windows down and the music blaring.

What sucks is that I can't find ANY additional material to put on this album.  Not a single demo or mix.  NOTHING!  So, you get the album, that's it.  Sorry.  I kept the cover the same because of that fact.  I'd be a dumbass to change up the cover of an album that's stayed the same.

Steve's work is great, but I feel he's been a bit spotty on his albums.  I know of a hundred tracks I like, but Passion & Warfare is the only album of his that I feel stands solid together.  Regardless, he is and always will be my most favorite guitarist ever.