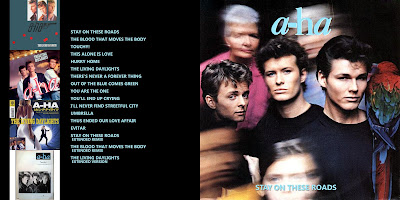 After Scoundrel Days came out, I eagerly awaited this release.  My sister was the one who bought all the A-ha stuff, so when this came out, I prodded and pushed her relentlessly until she finally went down and bought it (I was 16 and she was 14)  I think in that first couple months, I listened to this album more than her.

I feel that this is a fantastic album.  It continues along the same vein as it's predecessors with beautiful synths and warm vocals and melodies.  A truly terrific album. BUT...

-  I prefer Scoundrel Days to this album.
-  The original mix of The Living Daylights is really horrible.  The album mix is by far SUPERIOR.
-  I've included the unreleased demos from these sessions, and they're pretty weak.

This album was A-ha's last trendy poppy pretty-boy release.  Starting with the very next album, they actually released an album that had some balls.  That's when I began to truly respect them as musicians in it for the long haul, and not some flash in the pan.

They've obviously released a deluxe version of this album already, but I felt the need to do my own version, as they (along with a lot of other artists) didn't release it in a format that could be listened to in one sitting without shuffling the tracks.  They'd back shitty demo with excellent recording to live track to remix to first and second takes to the same song mixed differently back to back to back.  I hope that with this collection, I've weeded out the garbage and made it more palatable for one listening.  I hope you agree...

Email ThisBlogThis!Share to TwitterShare to FacebookShare to Pinterest
Labels: 1988, A-ha, Stay On These Roads