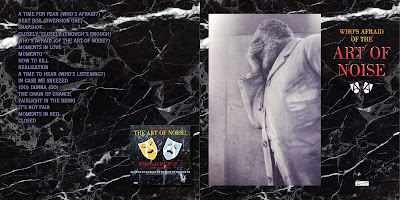 It's funny that AoN ever even released a Greatest Hits in the 80s.  I know they had singles, so maybe they should have just called it Singles or something.  I say this because I feel that every album, in itself would make it virtually impossible to distinguish which songs were the "greatest", as every song is a masterpiece in it's own right, and it becomes subjective on who is listening and deciding which is better than the other.  Sometimes, I would consider it impossible even to have one person decide, as whenever I listen to one of their albums, the songs I like change and shift back and forth with my age, time and environment.

I listened to this album once again as I prepared the cover (I usually listen to the album in question when I'm making the cover.  It gets me in the mood.)  Anyway, I realized that as I hadn't listened to it in probably a decade, the songs I originally liked had now changed.  And they had changed the last time I listen to them, too.  I have to say, looking at the track list right now, at one time or another, every song on the album had once been my favorite song.  Is it a greatest hits?  Hard to say, as they would have to be greater than something, and right now they are all equally good.

But, that opinion is hardly worth debating.

We all know that the singles were Beat Box, Close to..., and Moments in Love.  I think the most well known was the Close to... as the Edit version had the video of the little punk rock girl with the chainsaw.  What a great video, I loved that one!  But, all three of those singles had about 10 mixes each, and could each fill their own CD (I might do that later) and some of the mixes are near impossible to track down.  I'm still missing Diversions 4 and 9 of Beat Box, and I can't tell if I have all of the mixes of the other two.  Does anyone out there have a complete list of all the mixes of these three songs?  It would be helpful....

I hope you like this album.  As with all other AoN albums, it is a piece of art that needs to be treasured...  (I'm sure MLG will like this one, at least ;) )

Email ThisBlogThis!Share to TwitterShare to FacebookShare to Pinterest
Labels: 1984, Art of Noise, Who's Afraid of (the Art of Noise!)