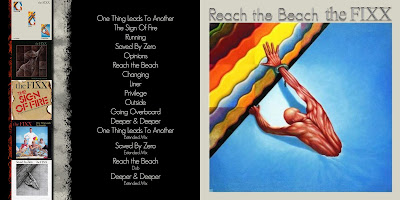 I really want to post some good stuff on this album, because it more than deserves it.  But, I am in a really fucking bad mood, so bear with me.  I could choke a mother fucker right now.  Do you ever get tired of working for stupid people?  I mean, we all have to work WITH stupid people, but to work FOR them.  You work for them, and they're fucking idiots, and you can't point it out because you could jeopardize your job or position.  What the fuck is that all about, anyway?  You'd think they'd appreciate knowing when they are letting their stupid leak out like a booger hanging out their nose.  Because once you see their stupid hanging out, it's hard to see anything else.

Anyway, I feel a little better.

I remember the singles from this album back in the 80s intermixed with all the other 80s songs I remember.  Pretty good, but nothing I was going to get worked up about.  Then, in 1997, an employee of mine when I was managing restaurants, suggested I listen to the entire album as it was wonderful.  (Before I could do that, though, he got fired for pinching a female co-worker's nipple with his chef's tongs.)  I finally got around to listening to it in mid-2004, and I remember being thoroughly impressed.  This one would again fit in with my "pleasantly surprised" category.  I'd almost call it something in between New Wave and Prog/Classic Rock.  A unique and attractive sound.

The singles are great, and the b-sides (as some of you may remember) were difficult to find.  The mixes are great, and I love the original cover, so I didn't change it much.  I just messed with the font a bit, and gave it some depth...

Anyway, I'm going to go try and relax with the fam, as work SUCKED DICK today, and I need a fucking break from idiocy.

Email ThisBlogThis!Share to TwitterShare to FacebookShare to Pinterest
Labels: 1983, Reach the Beach, The Fixx