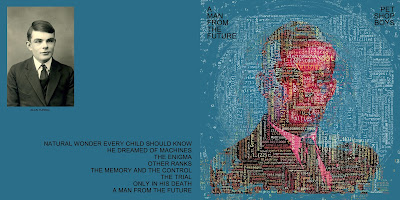 While looking for new and interesting material for the blog, I happened upon these PSB tracks that I never knew existed.  Wow.  Who the hell is Alan Turing?  Well, the Guardian had an article about it, here.  An interesting story, but lacking in any sort of traditional PSB trappings.  Yes, you have Neil's nasally, whiny vocals (don't get me wrong, I like them) but as the article said, not enough Chris.  And the narrator was boring as well.

BUT, it is some more PSB.  I'd almost like to see a studio version of this album with just Neil and Chris, and nix the orchestra and the narration.  Then, it would be so much better.  Either way, though, it really shows how the Boys (especially Neil) have always tried to broaden their abilities beyond the synthpop genre that they usually do their work.  It gives them a sense of depth, intelligence and maturity.

As for the track listing, I'm not sure exactly how many tracks there are supposed to be, as I found to different sets, with different numbering.  I'm not sure yet if whoever posted this "Prom" cut it into tracks at different moments, and more parts, or if there's portions missing, or whatever.  To be honest, I haven't listened to the whole thing all the way through in one sitting yet, so I'm not sure about it.

Regardless, it's another fine example of PSB work that you can confidently place right between Electric and Super.  Who knows, you may love it more than I did.  And I have no problems including it in my PSB collection.....

Email ThisBlogThis!Share to TwitterShare to FacebookShare to Pinterest
Labels: 2014, A Man From the Future, Pet Shop Boys