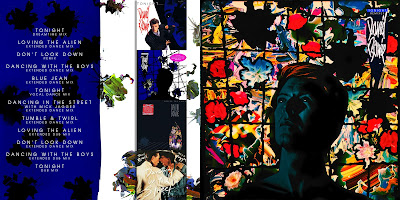 Although Bowie's follow-up to Let's Dance wasn't that successful, it really wasn't a complete loss.  Trying to find his way, through the New Wave crap that had left his classic style behind, I think he did quite well establishing a new sound to fit the new decade.  I sometimes think of this album as the little brother of Let's Dance, being so similar in style.

Honestly, I remember hearing the Let's Dance songs on the radio, and I remember when Never Let Me Down came out, but I am at a complete loss when it comes to Tonight.  I don't remember hearing any of the songs on the radio, and I don't remember the album coming out.  I only found out about the album in the mid to late 90s while rummaging through 12-inch singles at a used record store and finding the singles from this album.  I never realized how ignorant I was before the internet.

SO, I've decided to hold off on the album, for now, as I want to ensure I have all of the tracks from this time period before I post it.  But, I thought a good mix disc would be fun, and we also have another Dreamtime mix on this one too.  I threw Dancing In the Street on this mix as it was released during this time period, but with much chagrin.  That song (and video) is embarrassing.  I almost feel sorry for the two of them.  It's horribly, uncomfortably bad.