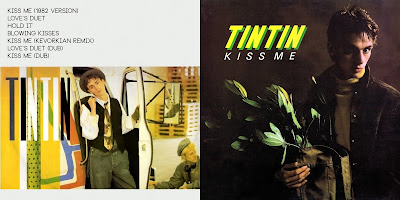 Now, here's one dude you HAVE to feel sorry for.  Lead singer of a band, struggling to get discovered.  He quits the band, the band gets a new lead singer.  The band gets discovered, go on to become possibly the biggest sensation of the 80s.  And every one else asks  "Who is Stephen Duffy?"  That's GOT to hurt.

These are his first two singles that I've collected into an EP of sorts.  It's Stephen's first outing after leaving Duran Duran.  He obviously was trying the New Wave thing here, before he drifted into that Post Punk sound with the Lilac Time.  It's not a bad disc, but it's a far cry from D2.

You almost wonder what would have happened in the 80s if Mr Duffy had stayed and Mr LeBon had never been found.  Was Simon destined for greatness?  Was D2 in the right place at the right time, or was it Simon's vocals that made them great?  I just now listened to the GOF demo with Stephen Duffy singing, and although it WAS a demo, it was crap compared with the official version.

Anyway, enjoy this little one, it ain't bad, and will fit nicely in your 80s New Wave folder or on your CD shelf.  That's where I have mine.

Email ThisBlogThis!Share to TwitterShare to FacebookShare to Pinterest
Labels: 1982, Kiss Me, Tin Tin