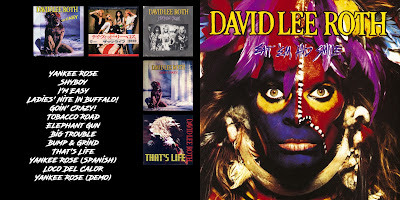 DLR's first real solo album, Eat Em And Smile, is better than his Crazy From the Heat EP and harder than his Skyscraper album.  Yankee Rose is a stadium rocker.  Shyboy, Goin' Crazy and Elephant Gun are powerful pieces, and the rest of the album is pretty...  cool.

Yes, he's nuckin' futs, but his voice is great and his stage performance is second to none (for his style of music).  I hate the fact that he couldn't work with the VH brothers any more, because I think that had they stayed together, they would've been much bigger than either of them were apart.  Don't get me wrong, I think Hagar is really freekin' cool, happy, good singer and songwriter.  I just don't think he had the magic to carry VH through to the heights they COULD'VE been.  And DLR SHOULD'VE kept his fucking huge-ass ego in check.  In the end, THAT is what destroyed him.  In fact, I think the reason why DLR's first two solo albums did so well is because of Steve Vai (see yesterday).  Notice that once Vai left, DLR suddenly sucked mega-dick.  His songwriting skills are for shit.

Regardless, this is a great album, but as I found with most of my "Metal & Hard Rock" artists, there really aren't any b-sides or remixes or even demos out there.  All I have is a few Spanish versions of his two hits from this one, and a single demo.

Play this one loud and relish in DLR's notorious howl.  It's going to be a great chilly Autumn evening, and I plan to enjoy every minute of it!