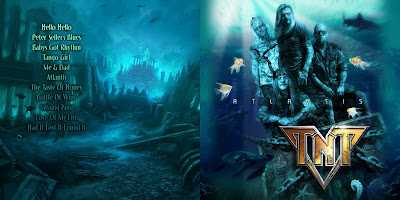 This album would definitely be in my "pleasantly surprised" category.  Of course, I had heard of and heard TNT back in the 80s when hair bands were all the rage.  Meh, they're alright, but there are so many other hair bands out there to listen to that are so much better.

Then, in the 90s, everything was alternative and electronica and industrial (the trendy pop kind ;) ).  Not only did I barely listen to any Hard Rock/Metal, there wasn't much to choose from (no internet, music stores not carrying much, no stations playing any except industrial metal)

Slowly, in the mid-aughts, the genre started to reemerge.  First I saw more Metal, then the Glam/Hair Bands started back up, then again, full on Hard Rock.  As I started sampling different groups out there, I heard plenty that stood out, and plenty that sucked ass.  Surprisingly enough, I decided to get this TNT album based strictly on the logo.  It was neato.  SO glad I did...

There isn't anything special in the way of b-sides, mixes or unreleased material, so I'm just posting the album.  It made my cut not just because it's so good, but because I feel that these guys haven't been properly represented, and there is probably a bunch of you who might appreciate hearing them.  Everyone has heard Back In Black, so what's the point?  How many of you have heard this one?  Thought so.

Tony Mills was with TNT for 3 proper albums.  I consider them something of a trilogy.  He sang lead vocals on all three, and I think he redefined TNT's sound to update it and carry it forward creatively.  Comparing these three albums to TNT's other works, they almost sound like a different group.  Tony is from England and has sung in many bands and as a guest on many albums.  Everything he sings is very powerful and his vocals are smooth yet powerful.  He also carries a British flare through all of his melodies.

From Atlantis, my favorite of the three, you get pulled into an arena stomper on the very first song, Hello Hello.  The song sounds like a metal version of a 70s glam outfit with high platforms, flaring bell bottoms and wild frilly colors jumping out from the stage and into your face.  The melodies, riffs and hard hitting rhythms carry through the better part of the album.  There are a few moments on the back half that are shaky, but it definitely ends solid.

If you are into Metal/Hard Rock/Classic Rock, I think that you should give this album a try at the very least.  If you like this one, the other two with Mills are A New Territory and A Farewell To Arms (Engine).  Great great shit on these....

Talk to you tomorrow.